With a culinary repertoire as deep as her personality is big, Chef Jenn Evetushick, Executive Chef at the Renaissance Phoenix Downtown Hotel, has had a lifelong passion for creating unique, memorable, experiences and connections through food.

With a deeper understanding of the intrinsic impact that food can have in our lives, Chef Jenn began her inspired culinary career in 1999 at the Art Institute of Philadelphia where her talents and hard work were recognized with the "Outstanding Achievement Award" for the class of 2001.

In 2002, after completing an internship at Rittenhouse Hotel with Chef Jean Marie Lacroix and a second internship at Desserts International with Chef Gunther Heiland, Chef Jenn was named Pastry Chef at Fosters Market in Durham, North Carolina.

As a budding entrepreneur, Chef Jenn was successful in launching and operating her own private catering business in Maui in 2005 where she refined her passion for pastry and fostered an unmatched culinary skillset until she assumed the Executive Chef role at the Halimalie General Store restaurant where she was under the tutelage of Chef Beverly Gannon, one of the original eight founders of Pacific-Rim Cuisine.

In February 2012, Chef Jenn made a life-changing leap into corporate hospitality when she joined the prestigious culinary team at the Westin Maui Resort and Spa in Lahaina, Hawaii.   Over the next eight years, Chef Jenn would be recognized as "Leader of the Month" as well as "Manager of the Year" and would grow from Chef de Cusine (2012-2017) to Executive Sous Chef (2017-2018) and ultimately was was named Executive Chef at the Westin Maui in 2018.

In early 2020, Chef Jenn traded cocktail umbrellas and grass skirts for spicy margaritas and desert hiking boots as she made the journey back to the mainland and assumed the role of Executive Chef at the Renaissance Phoenix Downtown Hotel.  Here, Chef Jenn intends to highlight the micro-local, inspire growth in the next generation of culinarians and amplify downtown Phoenix as a culinary destination in itself. 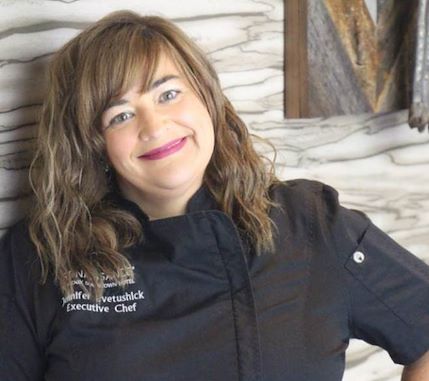